Stericycle agrees to settle for $2.4 million 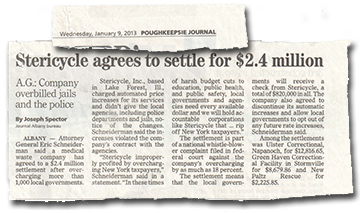 ALBANY -Attorney General Eric Schneiderman said a medical waste company has agreed to a $2.4 million settlement after overcharging more than 1,000 local governments. Stericycle, Inc., based in Lake Forest, Ill., charged automated price increases for its services and didn't give the local agencies, including police departments and jails, notice of the changes.

Schneiderman said the increases violated the company's contract with the agencies. "Stericycle improper-ly profited by overcharging New York taxpayers," Schneiderman said in a statement. "In these times of harsh budget cuts to education, public health, and public safety, local governments and agencies need every available dollar and we will hold accountable corporations like Stericycle that ... rip off New York taxpayers."

The settlement is part of a national whistle-blower complaint filed in federal court against the company's overcharging by as much as 18 percent. The settlement means that the local governments will receive a check from Stericycle, a total of $820,000 in all. The company also agreed to discontinue its automatic increases and allow local governments to opt out of any future rate increases, Schneiderman said. Among the settlements was Ulster Correctional, Napanoch, for $12,816.65, Green Haven Correctional Facility in Stormville for $8,679.86 and New Paltz Rescue for $2,225.85.